Must Have a Title #MRFWauthor 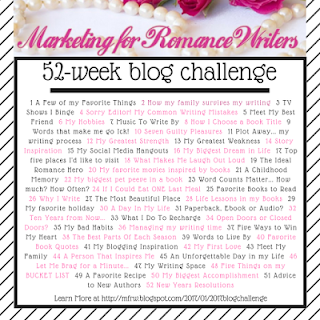 When it comes to writing a book, I always need a working title for it. You know, it's like a baby and you wouldn't want to call your baby "hey, kid" until you came up with a name. So I usually come up with a title that could be considered a nickname. But at least I have something to call the book when I refer to it.

When I come up with a final title, I try to consider the book as a whole and find a title that is meaningful to the story and characters in some fashion. I think I've been really lucky when it comes to the books and stories I've sold to publishers. I've only had one title changed and that was for One Week in Your Arms. My original title was One Week in Paradise, which I've used a lot in the promo I've done for it because that is actually what the brunt of the book involves is a one week trip to Hawaii. I would have loved to have had the book titled One Week in Paradise, with a billionaire (subtitle) with tagline: How can she say no?  But that was not to be.

Also with titles that are books in a series, I try to make them work together. In the Love Heals All series, the first book had 5 words in the title, so I came up with longer titles for the next two books so they would blend. I also matched the titles for my historical series, which I still haven't finished.

That about wraps it up for titles. I hope everyone has a good weekend!

You can check out other posts about titles at MFRW Blog Challenge
at February 23, 2017
Email ThisBlogThis!Share to TwitterShare to FacebookShare to Pinterest

Titles for series are tricky, especially if they weren't intended to be a series. Nice tip on adding a couple of words to create a new title for a series.

I'm pretty comfortable with series titles, but book titles are something else.

I've not had to tackle doing a series of books. Eventually I'd like to write more twisted fairytales like my first book, but the titles won't match the first. And hey kid does work LOL my kids all have names that I will mix up on a regular basis so they become hey kid. Whoever's closest answers.

I use the same technique of a working title for my WIPs. I do that with some of my characters also!

I use a similar process. If I don't have a title I use a working title too